A former middle school classmate took great offense at Harry’s tweets and launched what became a Twitter lynch mob. The unnamed woman, who has no ties to TCU, urged her followers to contact the university and complain.

The meeting of Major Cities Chiefs Association is aimed at devising strategies and examining causes of rising crime, Washington Metropolitan Police Chief Cathy Lanier, who organized the meeting, said in a statement.

Marilyn Mosby on the defensive?Jul. 22, 2015 – 4:12 – Baltimore City state attorney refuses to hand over records from her office’s investigation of the arrest and death of Freddie Gray to the defense of accused police officers

Baltimore killings soar to a level unseen in 43 years

BALTIMORE –  Baltimore reached a grim milestone on Friday, three months after riots erupted in response to the death of Freddie Gray in police custody: With 45 homicides in July, the city has seen more bloodshed in a single month than it has in 43 years.

Get the full report here.

Militia: if you can’t do it right, don’t do it at all

In the aftermath of the jihadist terror attacks on a recruiting office and reserve center in Chattanooga, patriotic Americans have stepped up to provide armed security at similar locations around the country, citing the military proscription on uniformed soldiers being armed for their own self-protection.

Some of these protectors have acted independently and spontaneously, but many have done so in response to a “National Call to Action” (http://www.ammoland.com/2015/07/oath-keepers-operation-protect-the-protectors/#axzz3ge10qKMf) by the Oath Keepers, an organization originally founded to encourage loyalty to the oaths taken by military personnel, public servants and others to protect and defend the Constitution of the United States, in the event of a conflict between those oaths and unlawful orders.

That original, laudable focus has been weakened by the organization’s tendency toward direct action, which has led to high-profile involvement in the Cliven Bundy ranch confrontation in Nevada, the civil unrest in Ferguson, and now the terrorist threat to military personnel in-country. In these instances, Oath Keepers have acted in the guise of a citizen’s militia. Without entering into a debate on the merits of any of these particular causes, let’s consider what might go wrong, and how thoughtful patriots might approach such issues.

When civilians arm themselves within the law and interpose themselves into situations beyond legitimate self-defense – a fair description of all three situations cited above – they invite miscalculation and tragedy.  Let us count the ways.

Those of us who, unlike our federal government, acknowledge that Islamic jihadists are waging war against us anticipate further incidents like what just happened in Chattanooga. Just as civil aviation has not been successfully targeted since 9/11, we may not see another attack on a military recruiting office. But soft targets abound, in a society enamored of “gun-free zones.” If the next ISIS-inspired attack is on a school, where under federal law no one can be armed except, perhaps, the lone school resource officer, the outcome will be far more horrific than what we saw in Chattanooga. In the aftermath – it’s almost too much to hope that Americans will anticipate this threat and act to deter or defeat it before it is executed – the need for citizen involvement will be even more acute.

This is why it is important that Oath Keepers, and other concerned, responsible citizens get this right. If private citizens stepping up to this security challenge cannot act safely and responsibly; if they overreact or misjudge a potential threat, and cause or contribute to the loss of innocent lives; if they make themselves a radical armed fringe group acting without the endorsement of their communities and local governments – then the concept of armed citizens contributing to public safety will be discredited, perhaps fatally. Those who sound alarms now at the government’s identification of ‘militia’ groups as potential terrorists or enemies of civil order “ain’t seen nothing yet,” compared to the reaction that will inevitably follow a botched extra-legal operation that sees citizens hurt or killed, and the armed citizens led away in handcuffs.

In at least one state, the Oath Keepers chapter is getting it right: they are quietly coordinating with recruiting offices, and planning to maintain a low-profile armed presence in the vicinity, of citizens with concealed carry permits, carrying concealed handguns only, and within their rights and the strictures of state and local statutes.  They will wear or carry pre-arranged identifiers to assist themselves, the recruiters, and first responders in telling good guys from bad guys, and they will coordinate closely with local law enforcement to allay police concerns and further ensure no misidentification and “blue-on-blue” engagements. We hope that the vetting process represented by state concealed-carry permit laws will be strengthened by an internal review of volunteers’ state of training – and state of mind.

Full disclosure: I am a principal at Pulse Firearms Training, Inc., where we have been wrestling for some time with these issues, and have created a training program that goes well beyond individual firearms training to address the thorny problems of creating private security networks to defend businesses, churches, schools, neighborhoods, and communities when the social contract with the state proves inadequate – when police response is delayed or inadequate because of budget, manning, or politics (consider Detroit for the emerging pattern). We certainly have no monopoly on good ideas, but this is what we urge, for the Oath Keepers and for any citizens facing today’s metastasizing threats:

Good heart is not enough; American patriots have that in great measure. It is vital that armed citizens establish those precedents – earn the confidence of society and the authorities – by acting in a disciplined and judicious manner.

AT A GUESS, SOMETIME AFTER JANUARY 20, 2017: Angry protesters in Chattanooga: When’s the governme…

By warrio16July 20, 2015002 Contributor: The Strategist, Uncategorized

Meanwhile, it’s self-help: “At Carl Poston’s family-owned gun shop, a few miles from Abdul­azeez’s home, demand for concealed-carry classes doubled in the days after the shooting. Shooter’s Depot, a gun store on the other side of town, said it had seen a fivefold increase, with as many as 100 people a day requesting spots in the gun classes.”If the government can’t defend you — or even itself — what’s it good for again? 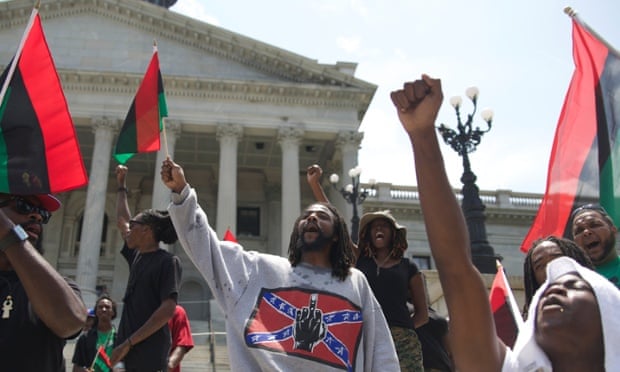 An African American activist, Malik Stroman, waved a Pan-African flag and a sweater with a middle finger printed on top of a Confederate flag. In between attempts to rile up KKK members, he chastised the disproportionate response of local law enforcement officers, whom he felt protected the white supremacists, something he said wouldn’t have happened for a comparable black group.

Source: ‘Still a racist nation’: American bigotry on full display at rally in South Carolina | US news | The Guardian

NBC News reports that Abdulazeez is a naturalized U.S. citizen originally from Kuwait.Authorities said the gunman lived in the Chattanooga area recently, but CBS News reports that he was from Phoenix, Arizona. The Associated Press says he lived in Hixson, Tennessee, which is a community in Chattanooga

White woman attacked by black thugs near Univ of Chicago campus… with kids in car.

“They were walking around both sides of the vehicle – in the front, in the back – and as they were walking across, they were hitting my car, using racial slurs and telling me that I didn’t belong in their neighborhood because I was white,” Pedersen said.The group, all African-American, she says, kicked the vehicle and shook it violently. Her children were in the back screaming.

Source: ABC7 Exclusive: Woman allegedly attacked by group near U of C campus with kids in car | abc7chicago.com

Let’s make the Confederate flag a hate crime: It is the American swastika and we should recoil it from it in horror…

He teaches American Studies at the University of Massachusetts, Amherst.

Source: Let’s make the Confederate flag a hate crime: It is the American swastika and we should recoil it from it in horror – Salon.com

If the United States does not want to go to war with the Islamic State, why not let mercenaries do it? The thought has occurred to many, including Eric Prince, the founder of Blackwater (now called Academi); Simon Mann, a British special-forces veteran who successfully led a private army in Sierra Leone; Sean Rowe, a Florida Army vet who has created a group called Veterans Against Isis; and Fox News spinmeister Bill O’Reilly.

Glenn Reynolds: Declaration should still wake the powerful up at night…

More than complaints about a king, the Declaration of Independence was a justification for rebellion that applies today.

Source: Glenn Reynolds: Declaration should still wake the powerful up at night

“We need to repair a broken system. Criminals don’t feel the repercussions of the justice system,” McCarthy said.A Chicago Police spokesperson said Sunday that along with the seven slayings, there were 33 shootings and 40 nonfatal victims in the wave of incidents.McCarthy focused on the death of 7-year-old Amari Brown, who McCarthy said was the unintended victim of bullet meant for his father.McCarthy said the system failed Amari. His father, who has been arrested 45 times and has a lengthy criminal record, should not have been on the streets, he said.”If Mr. Brown is in custody, his son is alive,” McCarthy added.

First, we don’t need new offices in Homeland Security. We need to get rid of that bureaucratic abomination, which has turned out to be even worse than I predicted when it was created. Second, the author of this stupid bill is Texas Republican Michael McCaul, who foolishly thinks this office will get the feds to go after jihadis. But all evidence suggests that the homeland security apparat views Americans peacefully supporting their constitutional rights as a bigger threat than jihadis.

OBAMA FLASH MOB LOOTING THE US TAXPAYER: Michelle Obama will promote education after trips to Japan, Cambodia and the UK

While in London she traveled with her daughters Malia, 16, 14-year-old Sasha and her mother, Marian Robinson.Mrs. Obama says the U.S. will continue to urge developed countries to join the effort.

In the Black Lives Matter statement, Bree explained her actions, saying, “we can’t wait any longer.”

“We can’t continue like this another day,” Bree said. “It’s time for a new chapter where we are sincere about dismantling white supremacy and building toward true racial justice and equality.”

Partisan warfare has broken out at the once-sleepy Federal Communications Commission, where disputes over Internet subsidies for the poor, robocalls and net neutrality regulations have taken on an increasingly bitter tone.

At an open meeting on Thursday, Republican FCC commissioner Michael O’Rielly accused the body’s Democratic majority of trying to force through an expansion of broadband subsidies for low-income Americans before President Obama leaves office.

“It is clear that the majority wants to spend as much as they possibly can without any hint of restraint before a possible change in Administration,” he said.

Though the agency is adversarial by nature — by law, only three out of the five commissioners can come from the same political party — a recent series of controversial items have laid bare the fault lines between some of the commissioners.

O’Rielly also accused unnamed commission leaders of lying to him during a later discussion on a measure to crack down on robocalls and spam texts.

Source: Rancor rises at the FCC